Up to now I have used the ptolomaic triplicity rulerships without question. This has changed. The discussion on how different results may be arrived at when using different triplicity rulerships has given cause to pause and think about their usage. It raises questions about how one approaches established tradition. Does one accept unquestioned everything that has been handed down over the centuries from such authorities as Ptolomy or Dorotheus? Even if there are apparent contradictions? This is the passive route. There are however two other courses of action. One either tries to fathom the contradiction or one corrects it. It is clear that any discussion for or against a particular system must come out of the tradition itself.

Jean-Baptiste Morin brings some powerful arguments for their reconsideration. He points out that in a great conjunction or an eclipse one looks to the nature and condition of the ruler of the sign in which the conjunction or eclipse takes place and not to planets that lack rulership there. This means that there should be no exception, not even for the rulerships of the essential dignity by triplicity. His arguments can’t be ignored.

I went through the rulerships as given by Ptolomy, Dorotheus, Schöner and Morin and tabulated them in the following manner. First I marked them from the standpoint of dignity by domicile/exaltation and debility by detriment/fall (table 1). I also marked those planets that are foreign to the triplicities that they are placed in. For example the fire signs are ruled by Mars, Sun and Jupiter respectively. Saturn has no rulership there. He is in fall in Aries and in detriment in Leo. There can also be situations when in a chart a planet is in detriment but at the same time has dignity by triplicity (Venus in Scorpio). This is the source of some consternation. 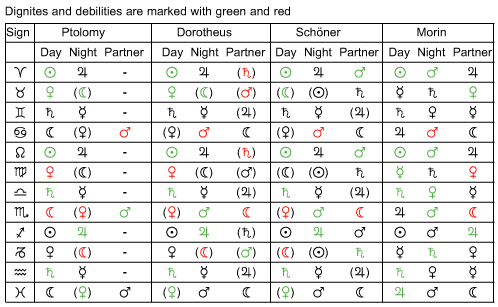 I have also looked at the rulerships in terms of sect (table 2). This seems reasonable as this particular dignity changes by day and by night. So sect must be important here. Otherwise why make the difference? With sect two conditions of the planets can be looked at. First diurnal planets should rule by day and nocturnal planets by night. Secondly in masculine signs the diurnal planet should be masculine and the nocturnal feminine just as in feminine signs the diurnal planet should be feminine and the nocturnal masculine. There is one difficulty here. All the truly feminine planets are nocturnal. The only planet that can be used as diurnal ‘feminine’ is androgynous Mercury. 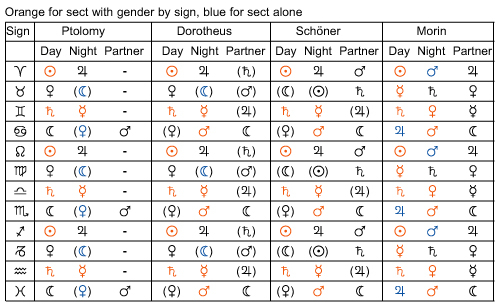 If we examine the first table we see that of the four systems only that of Morin uses the domicile rulers of the triplicities consequently. The ptolomaic system uses the Moon for night rulership of the earth triplicity and Venus for the water triplicity. Neither has rulership by domicile in this triplicity. The Moon however is exalted in Taurus as Venus in Pisces, so one might think that that is the reason, but there is a problem, the Moon is also in detriment in Capricorn and Venus is in fall in Scorpio.

Dorotheus’s system (Morin calls it Arabic ) is similar to that of Ptolomy. The day and night rulerships for fire, earth and air are the same. There are two differences however. First the triplicity is extended to three planets with a third planet as partner planet. Ptolomy has only Mars as partner planet for the water triplicity. Second the water triplicity is ordered differently. Venus instead of the Moon has rulership by day and Mars instead of Venus has rulership by night.

Schöner’s system is similar to the Dorothean, at least in the rulerships for the water and air signs. For the fire signs he has Mars as partner instead of Saturn, making use of a true triplicity ruler rather than a ‘stranger’. For the earth signs he switches the Moon to day rulership and instead of Venus introduces the Sun, which is puzzling as the Sun is a ‘stranger’ here.

Morin’s system agrees with the other systems as to choice of day ruler for the fire and air signs. For the water signs Mars as night ruler is in agreement with Dorotheus and Schöner. As noted above his system is the only one that makes consequent use of the triplicity domicile rulers. He also relegates where possible planets that are in detriment or fall to partner planets. With the exception of Mars, he makes the most use of planets that are already in dignity by domicile and exaltation. If you count the number of planets with these dignities you have 8 for Ptolomy and Schöner, 9 for Dorotheus and 11 for Morin. The other systems all have Jupiter as ruler for the night for the fire triplicity. Morin uses Mars. The same is the case for the air triplicity. Instead of Mercury he has Venus as night ruler. The rulerships in the earth triplicity differ the most. Here he has Mercury and Saturn instead of either the Moon, Venus or the Sun. In trying to understand why there are such differences it is helpful to use sect as a criterion. It won’t answer all questions but still resolves a few.

It seems that Ptolomy’s system matches the genders of the planets with the genders of the signs. The fire and air triplicities are all masculine. The earth and water triplicities feminine. The favoured sign is Taurus with one planet each in domicile and exaltation. Scorpio is the problem sign, with one planet in fall, one in detriment and Mars the only planet that is in his domicile is relegated to partner planet. The Dorothean system tries to correct this by giving Mars, a nocturnal planet, rulership by night. This is the only place where it is not in accord with Ptolomy. I still riddle why Schöner gave the Sun night rulership for the earth triplicity. The only reasonable explanation is that by moving the Moon to rulership by day he wanted to compliment her with the other luminary. Morin has tried to use sect a consequently as possible. If a nocturnal planet is available then it is used for night rulership and if possible the gender of sign and rulership is also considered. That is why Mercury is given rulership by day for the feminine earth signs.

What are the consequences? The logical step would be to apply the Morin system of triplicities immediately as they seem to make the most astrological sense. The first thing will be to look with a new eye at already familiar charts and go from there.

We can start with Ernest Hemingway’s chart. Surprise, surprise. If we use Morin’s system Jupiter is no longer peregrine! He also has the most points if we use Schöner’s method of finding the LoG. But he is cadent. Jupiter is the ruler of the 4th house and so deposits Saturn. He is significator for the father. I still think Saturn is LoG. And for my chart? Well, the planet that is LoG is no longer peregrine. Hurrah!!!

40 thoughts on “A Closer Look at Triplicity”