As mentioned in “Terms, Bounds and Appearance” the terms have some unusual features. First of all they are the only set of dignities that exclude the Sun and Moon. Although some say that the ‘bounds’ for the lights are extended to the nocturnal and diurnal signs – the Sun having its ‘bounds’ from 0 Leo to 30 Capricorn and the Moon from 0 Aquarius to 30 Cancer. But this is not practicable.

Ptolemy mentions three variations in his Tetrabiblos but only gives the tabulated values for the Egyptian terms and his mysterious, now called ptolemaic terms. He mentions the Chaldean terms but only describes how they are calculated. Some confuse the Chaldean terms with the ptolemaic terms but I think this is understandable considering how briefly he discusses them.

Like so many things astrological there are different preferences. Most astrologers in Hellenistic times seemed to have used the Egyptian terms, maybe because they didn’t buy Ptolemy’s story of finding them in an ancient manuscript? We will never know for sure whether Ptolemy did indeed find a system as ancient as the Egyptian or whether the manuscript was merely a device for giving his system some authority. The argument for the first is that Ptolemy was an encyclopaedist who collected all the material available to him (and before the burning of the library in Alexandria that would have been plenty) and not an astrologer. I haven’t come across any reference to his system being used during or after his time, but that doesn’t mean that this wasn’t the case, it just means I haven’t come across documentation. Ptolemy’s terms seemed to have been more popular in the middle ages to the time of William Lilly. Both he and Bonatus provide tables for the Ptolemaic terms. Interestingly enough Johannes Schöner in his book on the Judgement of Nativities used Egyptian terms.

I am not about to recommend one or the other leaving it to your judgement, dear reader. Both camps will tell you that their system works. And indeed both systems share some common features. There are differences in some of the signs and there are also often differences in how large the bounds are in each sign. But compared to the Chaldean system they are more similar than different. The Chaldean system seems accounts for a diurnal or nocturnal birth, with the term positions of Saturn and Mercury dependant on this. The Egyptian and ptolemaic systems ignore this. Also the Chaldean system has a regular division of degrees in each sign. The first term always has 8 degrees and each succeeding term one degree less (8-7-6-5-4).

I am including all three tables here for your perusal and comparison. I have marked those positions in the ptolemaic terms that are different from the Egyptian to make this easier. I hope that I haven’t made any typographic errors in spite of proofreading twice. (but should an error have slipped in please let me know!) 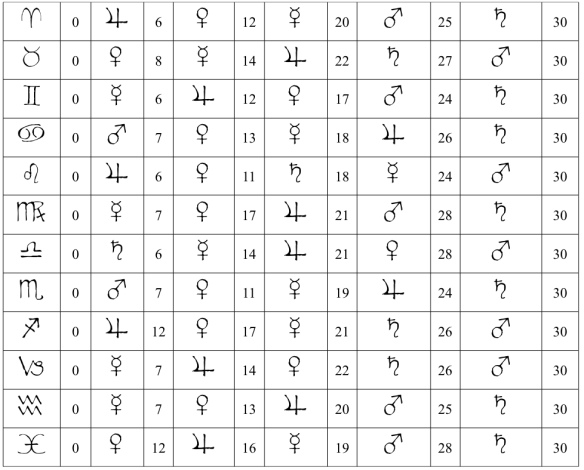 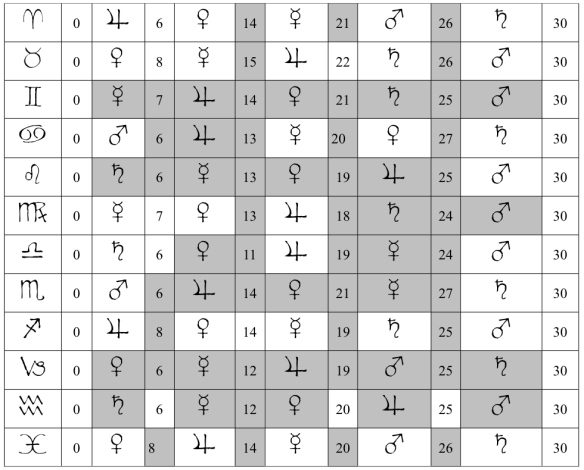 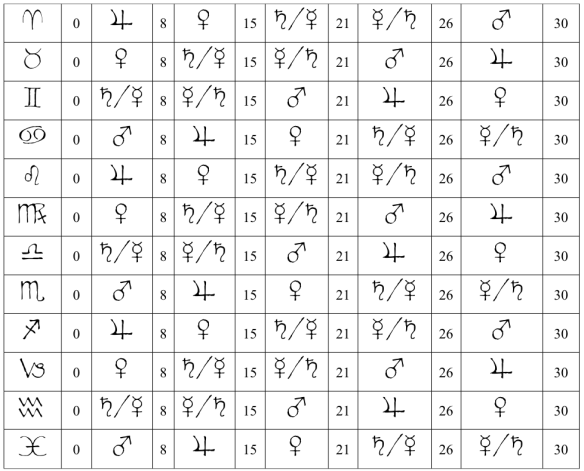 Chaldean Terms (for Saturn/Mercury the diurnal planet is indicated first)

Now that we have all three tables it will be interesting to compare the images of our Nobel Laureates. Some, such as Samuel Beckett have the same term ruler no matter which term system you use. With others there are differences and that we want to look at, but please no arguments about whether the Egyptian system is better than the ptolemaic or vice-versa. Should you comment you may however state which term system you think comes closer to the pictures. We have one disadvantage and that is that the pictures are static and deliver no gesture which makes quite a difference. I was, for example able to guess the terms (I won’t tell you which 🙂 ) for all of my family, and my wife, who has little astrology could also do the same…

With that said now take yourself to the quiz, of sorts, and give it a try.