Let us explore the square. We will tie in astronomical and numerical considerations as we go along.

A square is a two dimensional representation of embodiment. It is the four directions that an incarnated human being is embedded in or bound to (front, back, right, left). When projected into three dimensions as a cube, the directions of above and below complete the picture. The square can then be said to signify all of the manifested cosmos, all that is bound by form. This includes galaxies, stars, planets or any other body. The square is a symbol of form. Matter. And matter is subject to time. 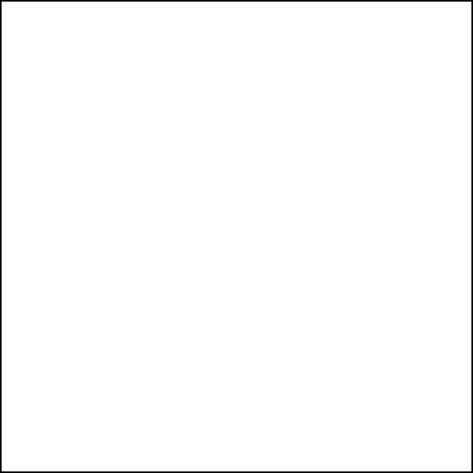 If we wish to signify the earth we must insert a smaller square. Thus:

The earth as our focus in the cosmos (Not proportional 🙂 )

We have said that matter or form is subject to time. Time becomes visible to us through the cycle of day and night, which is marked by the presence or absence of the sun in the sky. Let us add a vertical line to our diagram to illustrate this. Since we are ‘facing’ the square the top represents sunrise or the east. The bottom, our ‘back’ represents sunset or west.

Division by day and night

If we are perceptive we will note that at one point in the day the sun is at its highest and the midpoint of the day is reached. After sunset we may count the time and halfway through it is midnight. This is the complementary point to mid-day. We represent this with an additional, horizontal, line. So we now have the four divisions of the day; sunrise, mid-day, sunset and mid-night (I, II, III and IV respectively).

The cycle of day and night

If we count accurately and for a longer period of time we notice that day and night are never equal except for two times during the year. These are the equinoxes. We also will observe that after one of the equinoxes the days become longer and the nights shorter, the sun’s path across the sky is longer during the day. At one point the longest day is reached this is the summer solstice. After the solstice the days begin to shorten until an equinox is reached. After this equinox the days continue to decrease until at one point they are at their shortest and night is at its longest. This is the winter solstice. Again the days lengthen until the next equinox is reached. This cycle of light, which can be likened to breathing, marks the four seasons and also one solar year. It is not surprising then that the sun is described as square in Indian astrology. Not because he appears square in the sky but because his path is ‘square’! The inner square represents  one revolution of the earth around its axis and the outer square one revolution of the earth around the sun.

The solstices and the equinoxes are the turning points of the year. They are the ‘turning points’ or in Greek the τρόπος (tropos or ‘turn’). This is where the english word ‘tropical’ comes from. The corner points of the inner square mark the hinges. Corner 1 marks the spring equinox, corner 2 the summer solstice, corner 3 the autumn equinox and corner 4 the winter solstice. We can give these corner points names. Traditionally these points are also called the beginning of Aries (1), Cancer (2), Libra (3) and Capricorn (4).

The corner points or equinoxes and solstices 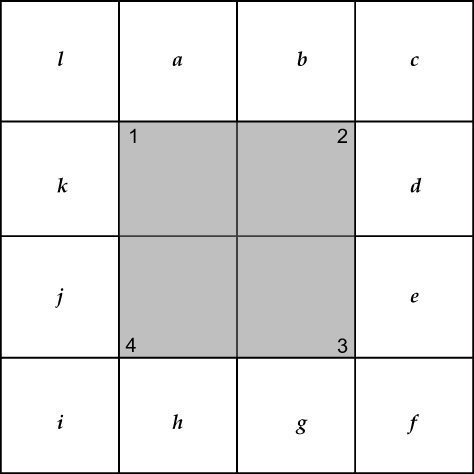 Each of these 12 boxes divides the cosmos around the earth into, let us call them 12 quadrants. These quadrants are empty. They represent the sky without stars. No cosmic body has yet been mapped into them. Remember this. These 12 quadrants are also known as the tropical zodiac and each traditionally has a name. So a is Aries, b is Taurus and so on. With this diagram we have arrived at the South Indian chart which surprisingly is an ideal representation of the tropical zodiac! Unfortunately these names are also used to describe collections of stars or constellations and much confusion arises. The Sanskrit word ‘rasi’ is actually better because it simply describes what the boxes contain: a heap, mass, quantity, number, collection. So in each box there is a collection of galaxies, stars, planets, asteroids, or cosmic dust if you wish. There are two contending viewpoints as to how the position of planets and sensitive points should be mapped into the rasis. I leave you dear reader to draw your own conclusions as it is possible to use both methods, the so-called tropical and so-called sidereal zodiac, to map the positions into this chart.

Now these quadrants are very interesting. Quadrants a and b face the East,  d and e the South, g and h the west and j and k the North, if you remember our earlier exposition. They also have a correspondence with sunrise/Spring, mid-day/summer, sunset/autumn and mid-night/winter. Quadrant a is after the ‘turning’ and is therefore the pivotal part of the season of Spring. It can also be called ‘cardinal’ which means the same as ‘pivotal.’ In quadrant b Spring has established itself and is therefore ‘fixed’. In the corner quadrant c Spring begins to change direction, it is the period leading up to Summer the next turning point Quadrant c, being in a corner has two directions, East and South. It is ‘dual’. Quadrants a, d, g and j may be called cardinal. Quadrants b, e, h and k may be called fixed. Quadrants c, f, i and l may be called dual.

2 thoughts on “The Astronomical Square”