Now that the 2010 World cup is history we can look at the charts put up at Altair Astrology with hindsight. Let us begin with the horary question from the post: World Cup does Germany have a chance? If you recall the answer was, yes they would have a chance. If we glance at the chart we notice how very exact astrological imagry can be. 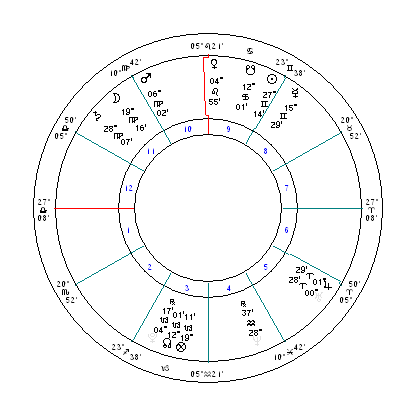 Does Germany have a Chance to win the title?

Venus the significator of the German team is 1 degree from the MC. Now the MC in this question represents the highest honour, which in this case is the title. By primary movement Venus has already passed the MC be 1 degree. By secondary movement Venus will reach the MC in one degree. If we look at the situation as an image then we can say that Venus is sitting on the doorstep of the 10th house. They came in third. Although it wasn’t the question, Venus sitting directly on the MC or in the 10th house would have meant that the title could have been theirs.

We asked the role of outer planets in some of the charts. A close conjunction, as in the event chart for the Argentina/Germany game where Uranus prohibited the Moon from conjunction with the significator for Argentina, seems to have been effective. In other charts such as the event chart for the final game, Neptune just before the Ascendant couldn’t override PoF just inside the Ascendant or even conjuncting the PoF (depending on which formula you use). Notice that in this chart the PoF is calculated using the night formula, the fixed formula would give the PoF at 28 Aquarius 12, just before the Asc. In the ongoing discussion on whether to reverse by night, this would seem a win for the “reversal” party. But here a member of the “fixed” party could equally argue that a rising PoF shows the emergant winner of the game.