I wrote this a month ago, but decided not to publish while the event was so recent. The questions asked below could equally be applied to the recent earthquake in Chile. This too I would prefer to look at closer at a later date.

The recent earthquake in Haiti has had me examining the charts and has raised many questions.

Before looking at the charts I would like to tackle these questions and try to answer them.

Here is the chart for Port-au-Prince at the time of the earthquake: 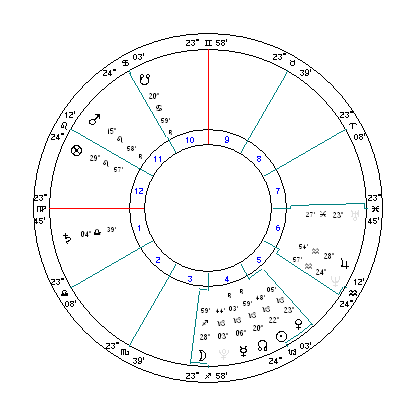 Most notable is Uranus on the descendant and Moon close to the IC. The Moon, Pluto and Mercury are also in the 4th house. The antiscion of Mercury Lord 1 is conjunct the IC. If we look at the midpoints we find Jupiter/Neptune at the midpoint of Moon/Uranus. Mars also on the midpoint of Mercury/Uranus. The Moon is in opposition to the IC of the Solar Eclipse of July 2009.

If we look at some of the mundane charts, Capricorn Ingress, previous solar and lunar eclipse, can we see earthquake potential? Could a local astrologer who follows the charts have seen the possibility? Let us look at a few factors:

If we take into account the planetary positions during the inception of Haiti as an independent state (Jan. 1, 1804 Gonaives Haiti) then there might be call for more acute attention, particularly considering the recent Saturn return at 3*27 Libra. There is also a Pluto/Mars conjunction at 3* Leo if you want to bring Pluto into the picture. The predominance of Uranus, Mercury and Mars in the above three mundane charts should have a local astrologer looking for more detail. That means looking at more than one solar eclipse and looking at the moon phase charts for the period as well as ingresses of Mars and Mercury. I however don’t think that anyone could have predicted the destruction of this earthquake on the three charts alone. The earthquake chart of course provides the detailed information.

2 thoughts on “Earthquake Prediction: What are the limits?”