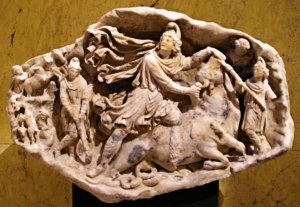 The relief depicted above can be seen in the Kunsthistorisches Museum in Vienna. It depicts Mithras and the Bull. This relief, is interesting as it depicts two torchbearers, which are an important part of Mithras iconography, but not always depicted.

We know very little of the Mysteries of Mithras as it was an initiatory religion. Its ceremonies were secret. Most of the historical written records we have are polemic and unlikely to be accurate, or if accurate then very strongly misrepresented. What we do know is that there was a very strong Persian, that is Zoroastrian influence. We can safely say that the Mithras Mysteries inherited the star wisdom of the Magi. We just don’t know to what extent. The only real ‘documents’ we have are the remains of cult centres devoted to Mithras. These were always in a cave or grotto and usually had an image of Mithras near the altar. (At its height in the late Roman period, there were more than 600 Mithraeum alone in Rome! )

Mithras is a solar god, and it is not very difficult to recognise star imagry in the images associated with him. You will find the Bull, the Scorpion, the Serpent, the Twins, and references to other constellations. Overlaid is also the tropical zodiac, if what Porphyry describes in his “The Cave of the Nymphs” is accurate:

On this account they assigned a place congruous to Mithras, near the equinoctial; and hence he bears the sword of Aries, because this animal is martial, and is the sign of Mars: he is likewise carried in the Bull, the sign of Venus; because the Bull as well as Venus is the ruler of generation. But Mithras is placed near the equinoctial circle, comprehending the northern parts on his right, and the southern on his left hand… (The Cave of Nymphs) 24, Th. Taylor trans.

If we carry our discussion of the exaltation and fall of the Moon’s Nodes further, then the Mithraen representation may be considered as a classical astrological “source”. I would like to suggest that the two torchbearers are images of the Nodes. They are twins, but with one difference. One holds his torch upright; he is the immortal twin, the ascending Node. The other holds his torch upside down; he is the mortal twin, the descending Node. In the following photo their position has been lightened, along with the scorpion that is clawing the bull’s scrotum: 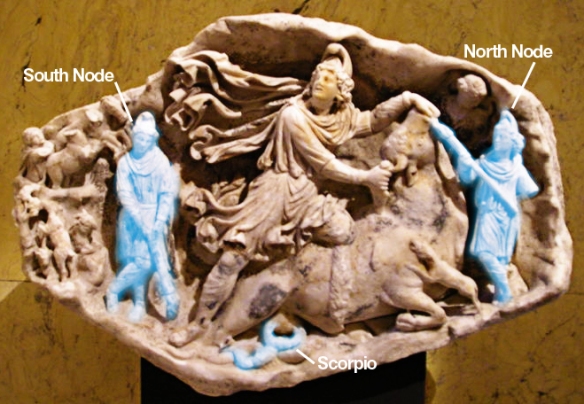 If you recall in the article “Nodes in Exaltation” we spoke of how the axis of the solstice at Cancer/Capricorn also forms the axis around which another set of ’shadowy’ points, the antiscia are generated and that any position in Cancer/Capricorn has its antisicion in Gemini/Sagittarius, which corresponds to the traditional North Node/ South Node exaltation position. If we consider what Porphyry has to say about the Cave of the Nymphs, we have Cancer and Capricorn as the two gateways into which souls enter and leave the world. These gateways are marked by the solstices. The two torchbearer’s, interestingly enough carry a light, and considering that the nodes have no light, but mark the crossing of the pathways of the lights, it is not entirely absurd to conjecture that they indeed represent the Nodes. Think about it. And if you have another suggestion, please say so!

8 thoughts on “The Mysteries of Mithras and the Nodes”